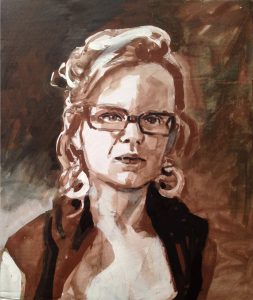 Märta Wydler is an artist of Swiss-Swedish origin and has lived in the south of France for 20 years. Graduated in Scientific Illustration at the Zurich University of Arts, she has been a freelance artist since 1992 and exhibits in France and abroad.

Märta teaches visual arts at the international school of innovation and sustainable design The SDS in Cagnes-sur-Mer.

After having moved to Nice, she developed a unique kind of photomontage which tells colorful stories rather like mini documentaries of places and events. She has participated several times in the “Sept-Off” Festival of Mediterranean Photography.

For ten years Märta focused on live painting of jazz concerts and contributes with her watercolors to the jazz magazine “Le Jazzophone”. She also developed live painting of events and people, creating nearly 200 large event paintings and hundreds of portraits.

Märta has done drawings and watercolors for the ARTE television series “Paysages d’ici et d’ailleurs”, and was a member of the French Watercolor Society for 10 years.

In 2016 Märta returned to the theme of nature. In painting and then in real life by moving to the countryside to the village of Le Bar-sur-Loup. “Liveness, beauty, diversity, strength and harmony are qualities of nature that I want to express and communicate in my works.” It is the ambience of a landscape as much as the detail of a flower or an animal that fascinates and inspires her.

There is a common thread in Märta’s work which seeks to represent the overall atmosphere of a place or event as much as the diversity and precision of details. She calls these works “ambiance portraits”.

Her mural paintings have allowed her to express a great biodiversity of a harmonious and colorful landscape: the mural painting ’Tribute to Nature’ at the National Theater in Nice and that of the village of Bar-sur-Loup at the Maison des Associations ‘La Passerelle’ created in 2021.